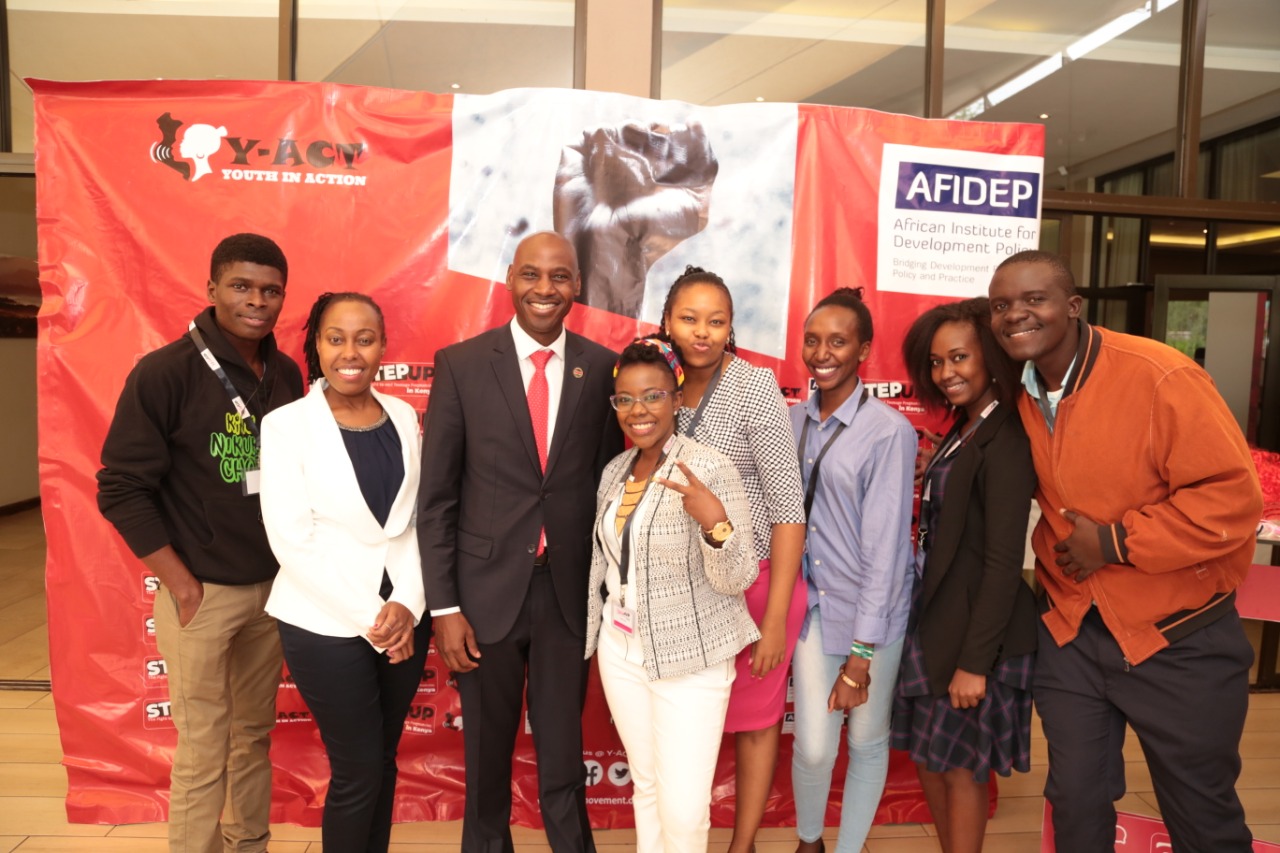 Youth-focused organisations around the country, including youth from marginalised regions and key populations, gathered in Nairobi to co-create an action plan on teenage pregnancies, a strong step towards ensuring that the achievements of the proposed action plan are spearheaded by the Youth themselves.

The two-day multi-sector mobilisation workshop held on 24-25 June 2019 and dubbed ‘Step up the Fight to End Teenage Pregnancies’ aimed at addressing various issues related to teenage pregnancies in Kenya through a multi-sector approach.

The national convening and launch of the Step Up Campaign will be held on 26 July 2019, led by Amref Health Africa through the Youth in Action (Y-ACT) programme in partnership with African Institute for Development Policy (AFIDEP) and other key stakeholders.

Amref Health Africa acknowledges that youth need to be at the decision-making table when it comes to developing concepts and programs tailored for them and their peers.

At the two-day workshop, participants conducted interactive and practical discussions on an array of issues related to teenage pregnancies so as to generate a practical work-plan and recommendations to help decision-makers and the affected group in reinforcing efforts to reduce the rate of teenage pregnancies in Kenya. Under the patronage of key facilitators in the field of sexual reproductive health and rights (SRHR), strategies were developed by the participants in four thematic areas: access and service delivery, uncomfortable conversations, digital information and innovations  as well as policy and legal interventions.

The Kenya Demographic and Health Survey (KDHS) 2014 report shows that Narok topped the list on prevalence of teenage pregnancy at 40%, followed by Homa Bay County at 33%, West Pokot at 29%, Tana-River and Nyamira counties at 28% and Samburu County at 26%.

Ministry of Health data indicates that while there is a spike in the number of adolescents accessing contraceptives, there is an upward worrying trend in the rate of teenage pregnancies in Kenya. This dissonance in data and this national crisis – a ticking time bomb – calls for urgent multi-sector action to interrogate the alarming rising rates of teenage pregnancies despite numerous efforts to confront them; and the need to share effective practice and interventions that can be replicated and scaled up with urgency.

Speaking at the opening ceremony, Y-ACT Director Ms Evalin Karijo highlighted that the workshop was the right way to invest in young people to identify a pregnancy prevention strategy and authentic action plan relevant to the needs of teenagers.

“We will take a multi-sector approach in this initiative and campaign and share best practice by allowing the youth to come up with strategies and action plan to end teen pregnancies. We hope Kenya will be an example for the continent on how to tackle teenage pregnancies.”

Ms Karijo further briefed the audience on the role that Y-ACT is playing in changing lives.

“We have spearheaded two other movements, the Meaningful Youth Engagement movement which was piloted in different counties and championed by the Young Parliamentarians Association, and the Youth 4UHC movement launched in March this year. Our third campaign is the Step Up Campaign to end teen pregnancy. A well-structured youth network can have a great impact as young people have the desire, drive and passion to transform the state of our country,” she said.

Executive Director of the African Institute for Development Policy (AFIDEP) Dr Eliya Zulu, said, “The issue of teenage pregnancies is a rights issue, and more critically, it is a development issue,” He stressed on the demographic dividend highlighting that when young people who constitute around 40% of the population have proper skills and education, the transformation translates to an increase in economic benefit to the country. He called on the youth to come together and work in unity and partnership with other technical stakeholders and ultimately contribute to the reduction of teenage pregnancies.

Speaking at the workshop, Narok County First Lady Mrs Sarah Tunai stressed the role of involving the teaching fraternity, parents and religious groups in the fight against teenage pregnancies, saying, “It is not in the curriculum, yet our children spend most of their time in schools. There is need to include sex education in the curriculum and provide accurate information to develop the capacity of our children in this area.”

“We should not only speak of teenage pregnancies, but also on Female Genital Mutilation/Cutting (FGM/C) which contributes to early and forced marriage leading to teenage pregnancies,” added Mrs Tunai. Mrs Tunai was speaking alongside her fellow First Ladies from Bungoma, Bomet, Kakamega and Tharaka Nithi Counties. First Lady of Bungoma County Mrs Caroline Wangamati said that the action plan formulated should be followed by concrete action on the ground where it matters most.