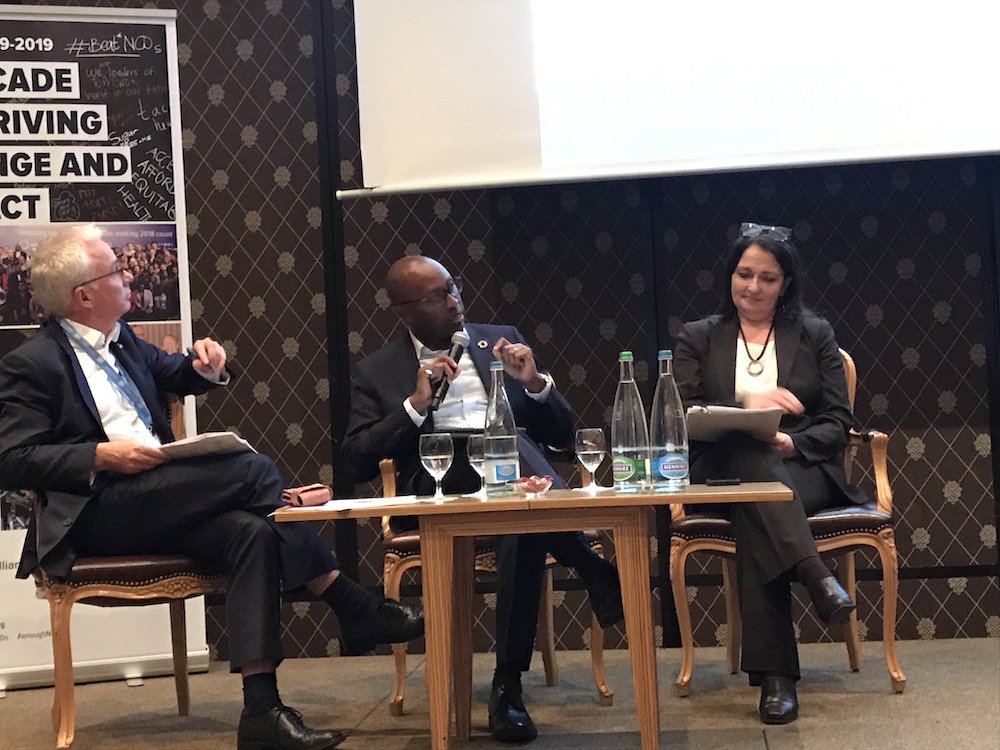 May 24, 2019, Geneva: “While countries need to develop their own Universal Health Coverage (UHC) strategies based on local contexts, there are several similarities between their health systems and governance structures,” said Amref Health Africa Group CEO, Dr Githinji Gitahi. “Through consultations in the last year, we have identified commonalities and drawn recommendations to build and further strengthen inter-country collaboration on UHC strategies. We will be releasing an action plan soon to take these conversations forward.”

Dr. Gitahi was speaking at an event, organized on the side lines of the 72nd World Health Assembly in Geneva. Supported by Takeda Pharmaceuticals, the meeting was hosted by Amref Health Africa and the Public Health Foundation of India (PHFI), to discuss inter-country partnerships to scale up community-led innovations, by working with multiple stakeholders, to achieve UHC.

Across Africa and Asia, countries are working with diverse stakeholders to leverage their respective strengths and improve health service delivery and access. Companies, technology actors and non-state private providers are bringing a unique set of skills and resources that are supporting the public sector to improve access and outcomes, particularly for the vulnerable, poor and rural communities. While these partnerships and innovations hold the potential to transform health care delivery, countries in the Global South need to learn from each other to leverage these stakeholders and build partnerships, while having a robust regulatory framework to guide these partnerships and ensure accountability.

“We recognize that scaling UHC efforts requires a truly multi-sectoral approach including a range of stakeholders, social economy actors and intermediaries. A knowledge sharing platform where countries can contribute as well as learn from, can go a long way in transforming health systems across the two continents,” said Dr. Srinath Reddy, President, PHFI.

The WHA meeting was a result of year-long consultations held in 2018-19. Held across Asia and Africa, the four consultations brought together innovators, research institutes, intermediary organizations, government officials, UN and multi-lateral agencies, and other private sector representatives, to understand the way countries are adapting health systems to include the private sector, scaling up proven innovations to reach wider populations, leveraging intermediary and multi-lateral organizations to bridge the gap between private and public sectors, and establishing accountability frameworks to ensure high standards of care.

Based on the discussions at the meetings, output frameworks were developed that delved into the critical issues, and defined the role of each enabler or stakeholder in furthering UHC. The framework also includes a list of countries that can work with each other, based on similar geographies, disease burden, health system and governance structures, and socio-economic status.

The identified countries can work together across critical areas such as leveraging health innovations in primary health care, human resources for health, last mile solutions in hard to reach geographies and in establishing communities of practice for regulation, accountability and private sector partnership models. The Asia-Africa Partnership is a call to local organizations across countries that can work together for sustainability of action and leveraging on existing structures. These best practices and knowledge sharing exercises are also being linked to other platforms such as the UHC2030.

Several countries across the globe are already working with each other on UHC. For example, the governments of Kenya and Thailand have signed a Memorandum of Understanding (MOU) for the next three years (2019-21) to cooperate on five critical areas to support Kenya in rolling out UHC across the country. Similarities in the two countries’ geography and population, as well income levels, paved the way for the inter-country partnership.

Asia and Africa hold at least half of the world’s population who lack full coverage of essential health services. While many countries have made significant progress in improving health coverage, key gaps remain. As governments continue to embrace UHC, they will need to invite the private sector to join key conversations, to build trust and ensure innovations and initiatives are supporting long-term health system goals.

In September 2019, the UN General Assembly will hold the first-ever UN High-Level Meeting on universal health coverage. The General Assembly is expected to galvanise global commitment to UHC by voting on a historic political declaration in support of health for all.

Overview of Key Consultations in 2018-2019
The first meeting ‘Innovations for UHC- India-Africa Conclave’ was held in June 2018 in Bangalore-India. This meeting was organised by the Government of India’s NITI Aayog and Government of Karnataka in collaboration with Public Health Foundation of India (PHFI), Amref Health Africa and the Institute of Development Studies (IDS).

The second meeting titled ‘Equitable Access to Healthcare in Asia and Africa,’ took place in September 2018, Amref Health Africa and UHC2030 hosted a high-level consultation along the sidelines of the UN General Assembly. The event brought together prominent health leaders including ministers of health, representatives of major foundations, NGOs, UN agencies and private sector players to engage in a dialogue on critical drivers of UHC in Africa and Asia. The event showcased examples of progress towards the achievement of UHC in Africa and Asia, and shared some of the solutions, innovations and ideas that can make UHC a reality in the two continents by 2030.

The third meeting ‘Leveraging Community-led Innovations for UHC’, was held at the Africa Health Agenda International Conference in March 2019, in Kigali. At this meeting, we examined various factors in the complex heath eco-systems within the Global South and how locally-developed health innovations are helping to accelerate Universal Health Coverage (UHC).

The fourth meeting in the series ‘Achieving UHC in Asia and Africa by Scaling community-led/local Innovations,’ was held in Hanoi on May 15, where the conversation focused on the adaption of health systems in Asia to support UHC, the increasing inter-sectoral nature of health innovation and the embedding of innovations from private sector and non-state actors into UHC models, and regulatory and accountability mechanisms which are required in order to leverage private sector for UHC.

About Universal Health Coverage
The Sustainable Development Goals set forth an ambitious target to provide access to quality, affordable health care for all by 2030 — a target that has evolved into a global movement. Universal health coverage (UHC) ensures all people, everywhere, can access the quality health services they need without suffering financial hardship. It is a fundamentally political goal rooted in the human right to health. The consensus among experts, including more than 360 economists from 53 countries, is that UHC is a smart investment and an achievable goal that enables people to fulfil their potential and contribute to the development of their countries. At least half of the world’s population does not have full coverage of essential health services, and each year, about 100 million people are pushed into “extreme poverty” (defined as living on US $1.90 or less a day) because of health care expenses they cannot afford.